From Roman ruins in Jerash to stargazing in Wadi Rum, Cathy Toogood journeys beyond the Rose City

"I think of Sirius like a modern-day social media influencer,” says stargazing guide Fakhri Al-Alami as he points to stars in the inky black sky with a green laser. “Whereas Betelgeuse is more like the girl next door.”

I’m standing in Jordan’s Wadi Rum desert learning all about the blanket of stars above me. Without the light pollution of a city, the sky is alive with shimmering pinpricks and I peer through telescopes to see the celestial beauties that Fakhri has given personalities to. Sure enough, Sirius dazzles like a diamond, showing off her status as the brightest star in the sky, more mature Betelgeuse glows in orange hues, the collection of stars in the Beehive Cluster gleam en masse, and the Orion Nebula twinkles just below Orion’s Belt.

Desert Adventures
This excursion to the RumSky stargazing centre is an optional part of the Jordan's Ancient Wonders trip by escorted tour specialists Travelsphere. We’re staying in the Wadi Rum desert in otherworldly bubble tents at the Mazayen Rum Camp where, pre-stargazing, we’d scrambled up a sand dune glowing red in the evening light to watch the sun set behind jagged rock formations.

Eager for more, we woke early the next day to watch the sun rise again, casting its first orange beams over the rippled sand

Travelsphere’s tour also takes in the Nabataean city of Petra; Jordan’s capital city Amman; Roman ruins at Jerash; biblical sites such as Mount Nebo and the River Jordan, and a spot of relaxation at a Dead Sea resort. 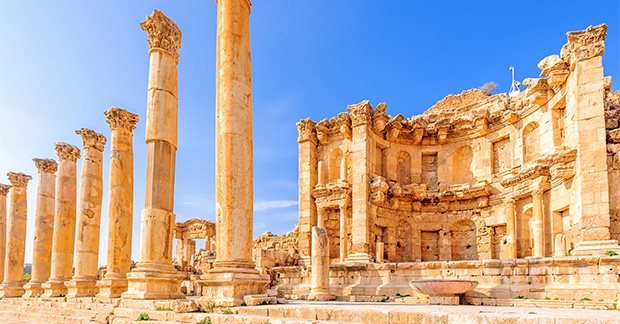 Nymphaeum, JerashIt was the first long-haul tour that Travelsphere ran after Covid travel restrictions were lifted and is proving to be popular, with the two trips that have run so far selling out.

Travelsphere sales director Sarah Weetman advises agents to get bookings in early so customers don’t miss out. Weetman says that a big selling point of the tour to mature travellers is the customer confidence that Travelsphere offers.

“When trade partners and customers book with us they can be assured of complete peace of mind by knowing their money is held in a trust until they return from their holiday, so it is 100% protected, no matter what." 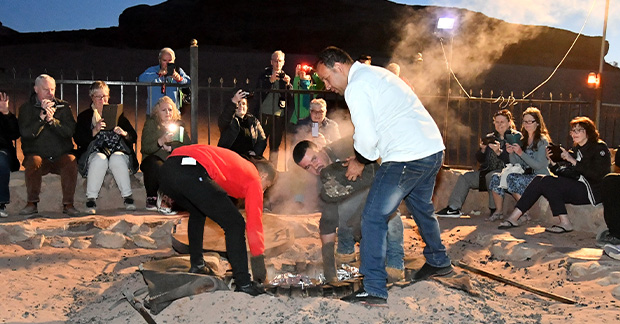 Chefs dig up dinner from an underground ‘oven’ in Wadi Rum

Changing Perspectives
Another big plus point is how much ground the tour covers. The vast site of Petra is an undoubted highlight, especially catching a first glimpse of the rose-coloured Treasury through the Al Siq Canyon or seeing the enormous Monastery after hiking up 900 steps.

Travelling with an expert guide who can point out everything from the best trails to notable rock formations, as well as giving historical insight, makes it even more memorable. But this is just one aspect of the trip.

Our guide, Mohammad Qamhiya, was keen to stress this point as we boarded the coach on day one, saying: “I consider myself on a mission to change people’s perspectives. When you think of Jordan, you think of Petra. But there’s much more.”

History Everywhere
Exploring the well-preserved Roman city of Jerash revealed the sheer amount of history there is to discover. While our group snapped shots of  grand Hadrian’s Arch, marvelled at the size of the Oval Forum with its soaring columns and entered its Roman theatre to the sounds of a Jordanian Scottish bagpipe band, Mohammad smiled and said, “Do we really care if Jerash is not Unesco? Not really, we have six of those already.”

As well as Petra, another Unesco World Heritage Site clients can visit on the trip is Bethany Beyond the Jordan. On the banks of the River Jordan, this serene spot is believed to be where Jesus was baptised by John the Baptist. Here we saw the remains of previous churches and mosaic flooring before being able to enter the river down wooden steps. Across the water, baptisms were taking place on the Israeli side of river.

Before our trip to Petra, we’d also spent a day visiting other significant religious sites such as St George's Church in Madaba, which houses the fascinating Mosaic Map. Dating back to the sixth century, it’s the oldest map of the Holy Land. This was complemented by a trip to Mount Nebo, where Moses is said to have looked out over the Promised Land. 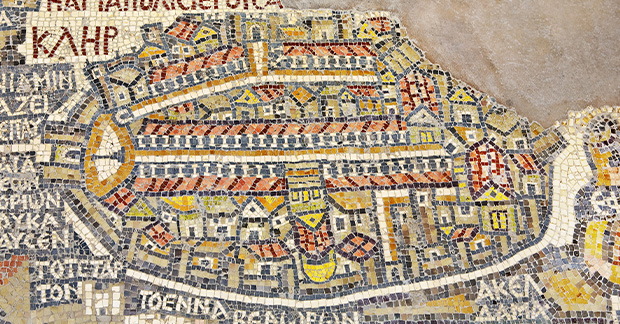 Madaba Mosaic Map at St George’s ChurchAs well as having a wealth of historical sites, Jordan – unexpectedly – turned out to be an exciting destination for birdwatching. We saw a little egret and a white stork from the coach window and kept an eye out for the Sinai rosefinch near Petra.

Our busy tour was rounded off with a day to relax and slather ourselves in mud in the Dead Sea. As I floated effortlessly like a human lilo gazing up at the blue sky, I thought about how much we’d seen but also also how much more there is to discover on a return trip. Mohammad’s mission was complete.

Linda Buckingham, travel counsellor, Travel Counsellors: “The things Travelsphere did well were the things you didn’t know you’d appreciate. These included an airport representative to get our visas done quickly, Wi-Fi on the coach and porterage at the hotels. It’s a joy just to put your bag outside your room when you’re moving on, just to find it already sitting by the coach after breakfast.”

Steve Arnold, travel associate, Designer Travel: “I’ll never forget the archaeological wonders that we visited, from the ancient city of Jerash to the Al Siq Canyon that hides the marvel that is Petra. Travelsphere offered luxury and comforts during our stay and the travel between locations.”