This year’s European Region of Gastronomy serves up exceptional food with a sense of fun, says Clare Vooght

Our chef Bjørn is strumming away on his guitar, belting out his rendition of Johnny Cash’s Ring of Fire. Every time he starts playing the harmonica, he tells us, we must have a gulp of our drinks.

Bjørn ran two restaurants with his wife on the island of Hitra before they moved to Trondheim – but this is no restaurant, it’s Bjørn’s front room.

“This is the only house in Trondheim with a licence to serve alcohol, so we have to make a toast to the mayor,” says Bjørn, before crooning his best version of Ruby’s Arms by Tom Waits.

The freedom of cooking his traditional Norwegian food in his own kitchen at home, and serving it to up to 24 guests in his living room, allows Bjørn – who is, incidentally, the spitting image of Antonio Banderas – to bring his other profession into the mix, which is music.

Guests are encouraged to make themselves at home, and fill up their own glasses

In between homemade olive breads with locally fished salmon and Norwegian bacalao (salt cod) stew, Bjørn plays his choice of Jerry Lee Lewis, Tom Waits and Bob Dylan covers (on rotation), along with his own songs, while telling us stories about his life. These range from learning piano at church and growing up on a quiet island to when he met the king of Norway, and by the end of the evening, it feels like I’ve known him for years. 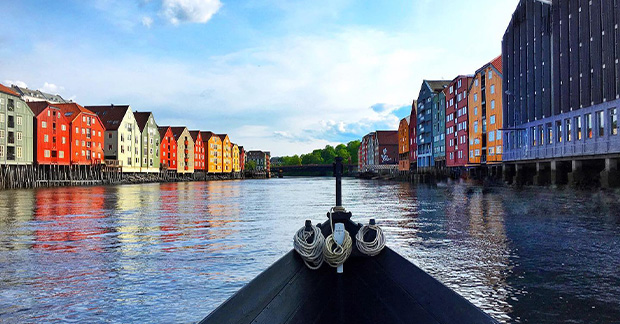 Culinary Destination
One particularly memorable – and catchy – song of Bjørn’s, played on his acoustic guitar, celebrates Trondheim and Trøndelag as this year’s European Region of Gastronomy. Which is why I’m here exploring the food scene in Norway’s third-largest city.

Experiences can be as involved as you like. Hardcore foodie clients will love foraging sessions with Trøndelag Sankeri, which involves picking wild plants, berries, mushroom and edible flowers with Jim – who forages for restaurants in the area, including Michelin-starred Fagn and modern Norwegian restaurant Troll – before cooking up their finds on an outdoor grill.

We feast on hake served with ‘truffle seaweed’, so named because it tastes like truffle. Jim tells us: “This is the truffle we are meant to eat; I think it’s really important to eat it. If you want the other truffle, you should go to Italy.”

While the ants sprinkled on our meringue at dessert – “the only way to get a citrus flavour in Norway” – are a step too far for me, I appreciate the principle behind the food here. Its a seasoning you'll find in award-winning Noma in Copenhagen, ranked as the world's best restaurant in the famous 50 Best listing more than once.

There’s a lot of phenomenal local produce that’s best enjoyed at its source here, where it’s at its freshest. There’s something about the geology of the region and the mix of minerals in the glacier water that makes the food here so special, says Roar Hildonen, general manager of Tor Rom og Kjøkken, which serves Mediterranean-inspired dishes made with local ingredients.

“If you ask a Michelin-starred restaurant where they get their langoustines from, it’s here,” says Hildonen. “All the chefs want to come here – it’s like having a restaurant just in front of heaven.” 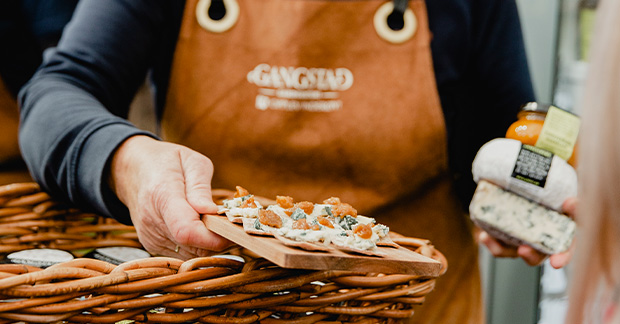 Celebrating Food
Hildonen was one of the people behind the Trøndelag Food Festival, an annual celebration of the region’s food, which brings 200 local producers to Trondheim every summer. Visitors can try smoked, cognac-infused salmon from Frøya island and cured reindeed from the high plains of Røros.

Kids can get stuck in too, with sushi, fishcake and pancake-making sessions, and bikes that power smoothie-makers. Adventurous eaters can try local dishes such as fish pudding, dandelion syrup, fermented trout and traditionally made brown goat’s cheese. Plus, the festival coincides with the Trondheim Brewery Festival, where visitors get tokens to redeem for taster servings of craft beer.

And with the biggest medieval church in the Nordics, Nidaros Cathedral, and the cobbled streets, colourful houses and cosy cafes in charming Bakklandet connected by the Old Town Bridge, it’s a charming city for a winter weekend. A trip with Trondheim by Boat to explore the fjord and canal offers a different perspective of the bridge, too. 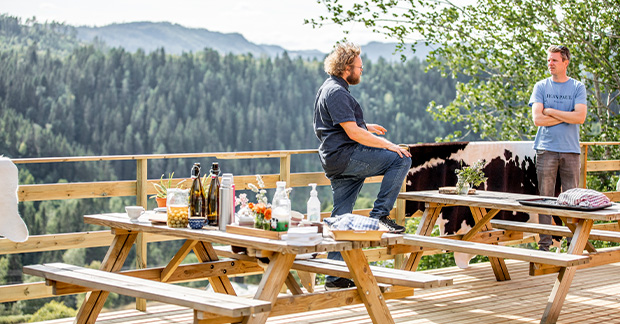 From the Farm
While the markets are an affordable, accessible way to explore flavours from the fjordlands and beyond, for clients looking for a blowout, there’s also Credo. One of the city’s three Michelin-starred restaurants, it serves a 22-course tasting menu offering a broad, micro-seasonal view of the local produce in true New Nordic style, with wine pairing.

Sustainability is important to restaurants here – the cows that produce Credo’s dairy have their pictures up on the walls. Diners can even meet them on a visit to biodynamic farm Skjølberg Søndre, which has just opened its own weekend restaurant and started to host pop-ups with local restaurant residencies.

Food in Trondheim is taken seriously, but it’s not without personality

At Credo, in addition to the cow portraits, they’ve kept an entire wall of graffiti from when the building, a former steel works, was derelict. And at another Michelin-starred restaurant we visit on the trip, Speilsalen, plates are put down on tables in unison, as if part of a choreographed dance performance. The atmosphere at both is laid-back and comfortable at all times. And while we might not be able to get away with refilling our own glasses there, like we would at Visit Bjørn, it’s a million miles from stuffy. Even the fanciest food here is fun – and that’s what makes dining in Trondheim so enjoyable. 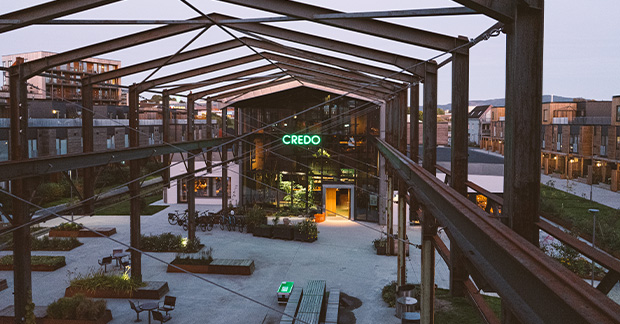 Sue says: "Trondheim is a vibrant and year-round destination with activity options for every season. This makes it a perfect destination for those seeking a convenient city break or those wanting to explore the authentic side to Norway in more depth. Trondheim and the Trondelag region really offer a true taste of Norway, with everything for every palate and every purse. Fine-dining establishments go hand in hand with cafes stocked by local producers, craft breweries and artisan bakers. There is also plenty to see, including the magnificent Nidaros Cathedral, the informative Folk Museum and the fun Rockheim, a museum dedicated to Norwegian rock music. Or venture out of town by car along the Golden Road, which is lined with farm shops, where you can sample local produce and see other sights." 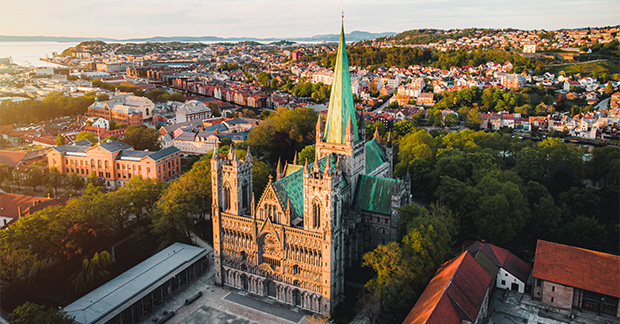 Top Tip
Clients going on a fjords or northern lights cruise to Bergen or Tromsø (lines such as Havila and Hurtigruten regularly sail from Trondheim) may wish to spend a couple of nights here first, to explore the city’s food and history. Plus, Norwegian has recently increased its capacity to Trondheim from Gatwick and added a direct Manchester service earlier this year, making the city even more accessible.

Tried & tested: Britannia Hotel
When the Britannia Hotel opened in 1870, it offered an English-speaking home-away from home, complete with afternoon tea, to the British aristocracy who enjoyed visiting Trondheim to fish for salmon. Fast forward a century and a half and, after a complete refurb in 2019, the 224-room hotel couldn’t be more modern. Expect TVs in the mirrors, iPad lighting and climate control, alongside classic marble bathrooms, comfy Hästens beds and enveloping, pillowy duvets. The real standout, though, is the food and drink. Restaurants include the theatrical Michelin-starred Speilsalen, where the dishes look and taste exquisite, and Palmehaven (pictured) for buffet-style dining and those afternoon teas in palm-filled surrounds. A true foodie hotel.