After hosting the 2022 World Cup, Qatar has its eyes set on becoming a sporting hub, says Jane Archer

So, this is how it feels to be an Olympian, I muse, as I enter Doha’s 3-2-1 Olympic and Sports Museum to stirring music and a roaring crowd. OK, they are on huge screens, but no matter; it still gives me quite a high.

The museum opened this year in Doha’s Aspire Zone – a rather futuristic name for an area with several sporting venues, including a pool and the city’s oldest football stadium.

It’s all part of Qatar’s bid to be hailed as the centre for sports and culture in the Middle East. Exhibits focusing on the country’s ambition to be a global sporting nation and the sporting events it has hosted are in one of the galleries.

There is also a special World of Football exhibition focusing on the FIFA World Cup, which runs until April 2023. One of the most striking things about the museum is the design of the building – a glass cylinder surrounded by rings to resemble the Olympic logo. And it’s all illuminated at night. 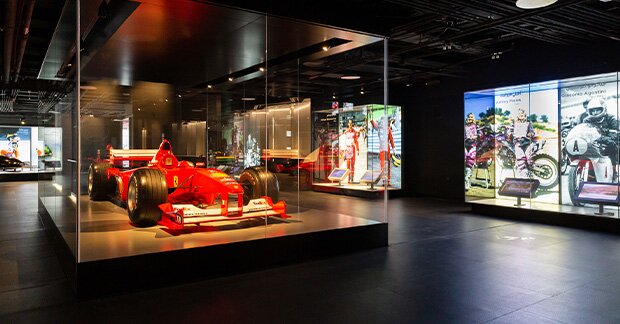 Inside, just to be different, you start at the top and snake down through seven galleries dedicated to all things sports and Olympics.

There’s a bit at the start about the history of sport (who knew the Chinese were the first to play football?) and the ancient Olympics, plus a film about the modern games. But I’d advise skipping through that to get to the displays of medals, mascots and torches from the modern games, and also the Hall of Athletes. Avid sports fans will love this area, which spirals down three floors, celebrating sporting greats alongside items they have donated.

There’s one of Roger Federer’s tennis rackets, Usain Bolt’s running shoes, the jockey shirt worn by Frankie Dettori at Newmarket in 2016, and the bike Chris Boardman rode when he won Gold in Barcelona in 1992.

They keep the best till last. At the Activation Zone I put on a wristband and test my sporting prowess on various high-tech interactive ‘stations’. I try hand-cycling, canoeing, running and zipwiring (actually hanging off a bar) and a ball game.

Apparently, I excel at fortitude. No gold for me, but it could have been worse.