"Bosnia is a book that most people only read a few pages of, because they think they know the story,” says our young guide Dino in Mostar, continuing: “They think Bosnia beginnings and ends with the war, but it has so much more to offer – if it’s a book, it’s one that’s filled with fantastic things. You just have to read on.”

Dino is passionate about what his country has to offer international visitors more than two decades on from the end of that war, and his passion is echoed by everyone I meet – particularly young people like Dino – on an unforgettable new Intrepid Travel tour of this hugely under-appreciated and compelling country.

Working with USAID’s Developing Sustainable Tourism in Bosnia and Herzegovina (Turizam) project and the Global Travel & Tourism Resilience Council, Intrepid has launched the tour in the hope of sustainably regenerating the country and its fledgling tourist industry.

Before Covid-19 took a harsh toll in 2019, Bosnia and Herzegovina had the third-highest tourism growth rate in the world

The five-year US$20 million project aims to enhance the quality and diversity of tourism products and professionalise the sector’s workforce and businesses. This will hopefully help persuade the international visitors who currently spend just two days on average here to stay a little longer, supporting local ventures such as shops, restaurants, hotels and the tourism industry as a whole. 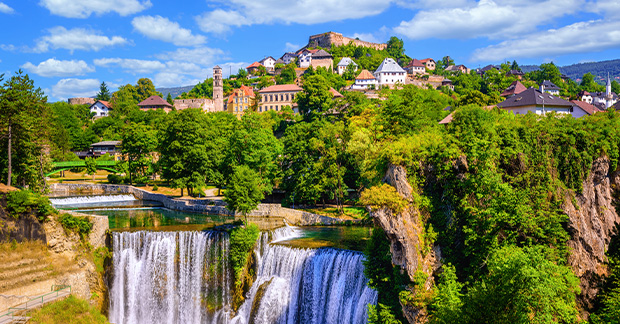 Intrepid's Eight-day Tour
Intrepid is the perfect partner for this endeavour, given its commitment to sustainable experience-rich travel, and its eight-day tour takes travellers into the very heart of Bosnia and Herzegovina – in every sense.

Beginning in the capital, Sarajevo, it double-loops north and south to encompass not only the beautiful scenery of this part of the Balkans, but also the incredible experiences, historical sites and encounters that are unique to it.

In Sarajevo, an absorbing walking tour takes in its tumultuous history, from its 15th-century founding as an Ottoman city to its current mix of communist-era and post-war architecture, via a pretty old town featuring a bazaar filled with wooden stalls, cafes, domed medieval buildings and picturesque mosques.

The tour’s focus is unsurprisingly the city’s horrific siege, which took place from 1992 to 1995, but 21st-century Sarajevo is characterised by its joy and resilience. Eating at Restaurant Inat Kuca – an atmospheric Ottoman house filled with intimate nooks and crannies – or drinking in some of the city’s great bars like Jasmina, heaving with friendly locals and even friendlier bar staff, we’re surrounded by Sarajevans who are looking to a future filled with hope. 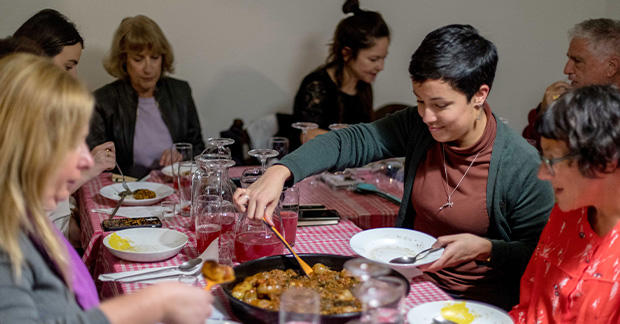 Cultural Nourishment
Our hosts that evening, Mustafa and Mersiha, are living embodiments of that hope, as they show us how to make burek (a flaky pastry pie) and serve up a traditional home-cooked meal in the hills overlooking the city. During a convivial and laughter-filled evening, we learn much about what life was like during the siege, their experiences of living through it both uplifting and sobering. Their thriving company, Bosnian Cooking Lessons, is just one that’s benefited from Intrepid workshops and USAID’s commitment to helping travel and tourism businesses with everything from marketing and branding to health and safety, and staff training. Over the next few days, we encounter many more.

In total, USAID hopes to have at least 20 new experiences developed for 2023

The small-town of Jajce, with a magical waterfall in its centre, showcases history’s evolution from medieval times to the current day with catacombs, a 3rd-century Persian Mithras temple, ancient mosques and two lakes that are perfect for kayaking, swimming, hiking and cycling. With input from Intrepid’s workshops and USAID Turizam, its updated branding is helping to put it on the tourist map.

A unique opportunity to encounter hundreds of wild horses roaming free across 60 square miles of the beautiful Kruzi Plateau in the foothills of Mount Cincar will hopefully reach a wider audience via adventure company Continental Adventure, which takes us for an unforgettable off-road safari and picnic lunch in a mountain refuge.

Another very different type of facility to have received assistance is Ark D-0, a preserved and underground nuclear shelter from the Tito-Yugoslav era, filled with art associated with the country and its history.

Elsewhere, a Herzegovina Wine Route centred around Ljubuski, southwest of Mostar, and featuring almost 30 winemakers, including family-run affairs such as Carska Vina and Andija, has already been launched with the help of the programme, and there are plans to add an East Herzegovina Cheese and Honey Trail too. 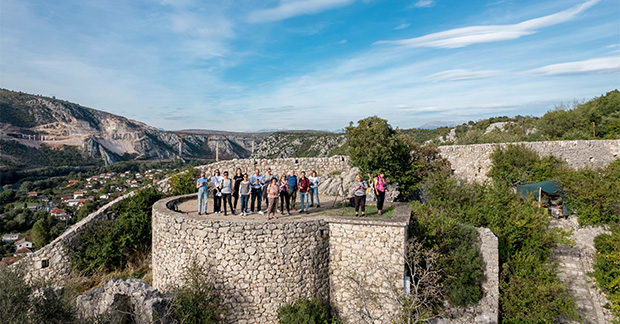 Diverse Sights
Intrepid’s tour takes in some of these experiences and many more in a country filled with genuinely stunning sites. We fall in love with Mostar’s old town and its rebuilt Old Bridge, one of four Unesco sites in the country, but are even more blown away by part of another Unesco site, the Radimlja necropolis, where almost half of the 273 medieval stećak or gravemarkers are carved with beautiful motifs. Nearby, the waterfalls and riverbank beaches of Stolac, a town overlooked by a scrambly fortress, is a great base for exploring.

When we reach Pocitelj, where beautiful Ottoman houses follow the side of the valley to the river Neretva, I feel I’ve encountered the highlight of the trip. En route, the unusual mossy overhangs of the gorgeous Kravitj horseshoe crescent waterfalls on the Trebizat river offer fine Instagram opportunities, as does the 15th-century Tekija Blagaz, a Sufi monastery/Dervish house in an incredible River Buna source setting under towering cliffs. 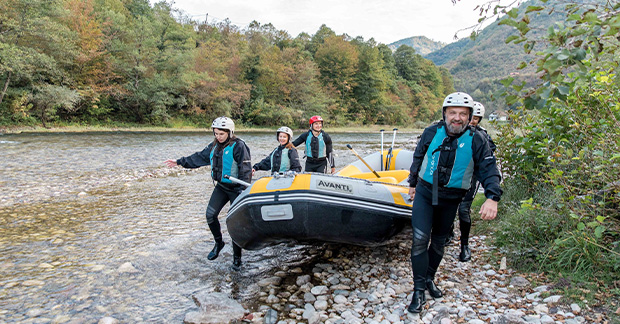 Natural Beauty
Heading back north towards Sarajevo, the town of Konjic, set on a curve of the Neretva River and surrounded by mountains, is the perfect base for hiking, cycling and white-water rafting through canyons and past waterfalls, all activities offered by local company Visit Konijc.

Established and run by a husband-and-wife team, the growing venture exemplifies the independent and entrepreneurial spirit of tourism and travel initiatives in Bosnia and Herzegovina. And it perfectly illustrates the country’s ethos: one with a youthful outlook and hopefully bright future – rooted in friendship and unity across different cultures and ethnic groups.

It’s to be hoped that tourism will not only make a huge difference economically, but also change the story from one of war to one of natural beauty and cultural heritage.

❂ Traditional food is centred around meat, but cheeses, salads, dumplings and meat-free variations of burek offer some vegetarian options.

❂ The country’s climate varies, with mountainous regions, a continental temperate climate in the north, and more Mediterranean temperatures in the south. Advise clients to pack accordingly.

❂ Indoor smoking is still allowed in Bosnia and Herzegovina, so bars and even restaurants can be smoky. Most offer dining outdoor areas, but few offer smoke-free zones.

❂ Most people you’ll encounter will speak some English, but learning words like ‘please’ and ‘thank you’ will endear you to everyone you meet.

Natalie Kidd, chief purpose officer at Intrepid Travel says: “We decided to run this tour because finding new destinations for sustainable travel is a priority for us at Intrepid. With overtourism issues in some parts of Europe, we love finding lesser-known places to show our travellers. Bosnia and Herzegovina is a fantastic destination, and we’re excited to start running our trips next year.

"It will give clients things they won’t find anywhere else, in a destination that has so much to offer in terms of history, nature and culture. The local people are very welcoming and eager to share their country and customs with visitors, and this new expedition will deliver on that through amazing food, gripping stories and thrilling adventures.”