The absurdly intricate breakfast arrives as we sit on hay bales, surrounded by rows of lavender. Seemingly hundreds of little morsels – cheese wrapped in vine leaves, spicy sausage, olive pastes and jams – appear in a collection of tiny bowls. The alfresco Turkish breakfast is taking place on the rim of a gorge looking down on to the weird rock formations the Cappadocia region is renowned for.

The slopes look like a giant’s fingers stretching out. Or a dragon’s teeth. Or an albino crocodile lurking in the grass. By the end of the first day, we’ve made a thousand attempts at describing the bizarre Cappadocian landscape, but none of them quite nail it. This feast is one of several experiences that make Exodus Travels’ nine-day Walking the Ancient Trails of Cappadocia trip distinctive. 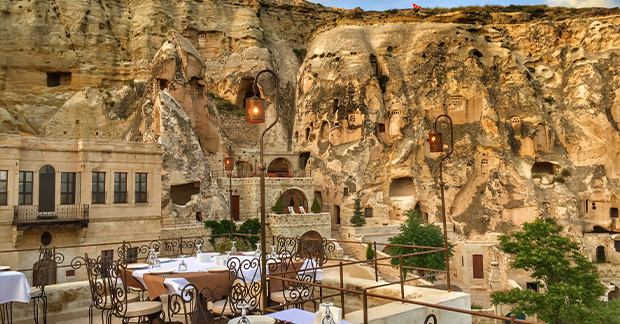 It’s part of the new Premium Adventures range, which offers high quality and unusual places to stay. In Cappadocia, that’s Yunak Evleri Cave Hotel – cave houses joined together. Furnishings have local flavour and authenticity, while the pools dip and weave under rock overhangs.

Cool accommodation isn’t the only difference. The Exodus Premium Adventures curate and include a swathe of unusual, stick-in-the-memory experiences. In Cappadocia’s case, that means the region’s highlights are covered with a lot more added on top.

A guided walk through the Red Valley, for example, will appear on many Cappadocian itineraries, and for exceptionally good reason. The rust-red water, multiple caves and suggestively shaped ‘fairy chimneys’ make it visually spectacular.

The Göreme Open Air Museum is another fascinating Cappadocian staple. The former monastery complex has cave chapels dug out of the rock face, many decorated with frescoes dating back hundreds of years when Christianity held sway over Cappadocia.

The Cappadocian cooking school is definitely not standard itinerary fare. We roll our sleeves up and help prepare dishes inside a family kitchen. It becomes a team effort as aubergines are pan-fried until tender, vegetables are finely chopped, chilli and mint are brought in from the garden and beef is stuffed.

We create extraordinarily flavourful dishes, which and served alongside the obligatory tableful of goodies in little bowls

In the town of Avanos, where pottery has been produced for thousands of years, master potter Galip Körükçü shows us how it’s done. Spinning the wheel with his feet, a lump of clay is effortlessly transformed into a smoothly curved vase. Galip manages to do it without any sign of concentration – indeed, as he works, he happily chats away.

His studio and gallery is, of course, inside a network of caves where assistants go through the painstaking process of hand-painting the bowls, vases and plates that light up the cave in kaleidoscopic colour. The detail is what makes Avanos ceramics special. And detail is key for what turns out to be the tour’s most strikingly memorable included experience.

Inside the 13th-century Saruhan Caravanserai, which during the Silk Road trade route days was a coaching inn-cum-intricately decorated fortress, something utterly spellbinding occurs. It’s tempting to call the whirling dervish experience a dance performance – but it’s a lot more than that. It is a spiritual ritual from the Sufi branch of Islam, where the participants enter a trance-like state as they repeatedly spin around in long white cloaks. 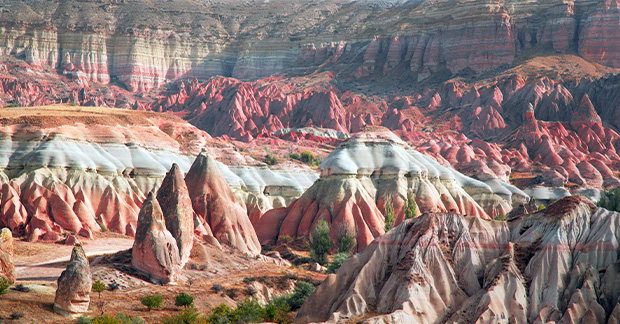 Cappadocia It sounds like it will be chaotic, but there’s a precise order to the ceremony, and all the little things, such as hand positions, are carefully choreographed. The whirling supposedly represents the soul rising to the heavens. What had all the warning signs of being a tacky, tourist-centric ‘cultural show’ turns out to be a genuinely affecting, mesmerising ritual. The ceremony is as it has been for centuries, with photography and clapping banned lest they break the magic.

There’s something else that Cappadocia is particularly famous for – ballooning

You have to get up revoltingly early for it, and there’s a moment of realisation as dawn starts to break to reveal dozens upon dozens of balloons being inflated and rising gently into the lightening sky. Hot-air ballooning here is not just about floating above the weird and wonderful landscape – it’s about doing so as part of an enormous aerial fleet. The sun rises, bringing out the pinks and reds in the rock layers, as the balloons float above the fairy chimneys, dragons’ teeth and cave houses. This time round, being part of the flock is a key part of the joy.

Exodus Travels' senior product manager for Europe, Tom Wilkinson says:
“Cappadocia is best discovered either on foot to allow travellers to properly explore its rock towers, caves and valleys, or by hot-air balloon for an unforgettable perspective of the dramatic landscapes.

"When advising customers of Exodus’ new Premium Adventures, know the USPs of the trip and destination, including all the exceptional experiences and incredible accommodation booked, so that you can highlight how it will enhance their holiday. For instance, the unique Yunak Evleri Cave Hotel in Cappadocia has two outdoor swimming pools with views of the fairy chimneys, one of the key scenic attractions.”