In 1959, when Wilfred Thesiger published his seminal work Arabian Sands, large areas of the Middle East were unmapped and unknown. Decades later, lands that once challenged the very limits of human endurance have been transformed by development and wealth – although one fragment of the British explorer’s “vanished past” remains.

In place of skyscrapers, sandstone pinnacles soar from the vast deserts of AlUla, Saudi Arabia’s historical heartland and big hope for future tourism. Glowing red beneath a setting sun, ancient tombs provide a tantalising insight into early civilisations, and symbols etched into the rocks outline a story yet to be told.

Aside from religious pilgrimages to Mecca (Makkah), tourism in Saudi Arabia was largely non-existent until 2019, when tourist visas were launched for the first time, but an ambitious multibillion-dollar project aims to transform the destination by 2030, building hotels, improving infrastructure and revealing a trove of treasures previously locked to the outside world.

Backed by a royal commission, AlUla – a 9,000-square-mile region in the northwest – is leading the way. A site so vast it’s impossible to explore by foot, the Kingdom’s first Unesco World Heritage Site, Hegra, features more than 100 high-rise tombs carved into the weathered remains of mountains.

Rattling across the dusty, exposed expanse in a vintage 4×4, I visit the intricately designed constructions that have remained untouched for 2,000 years. Part of an important Nabatean trade route, traversed by camel-drawn caravans transporting cotton, sugar and spices, Hegra bears an uncanny resemblance to sister city Petra – although far fewer visitors come here and less is known about the site. 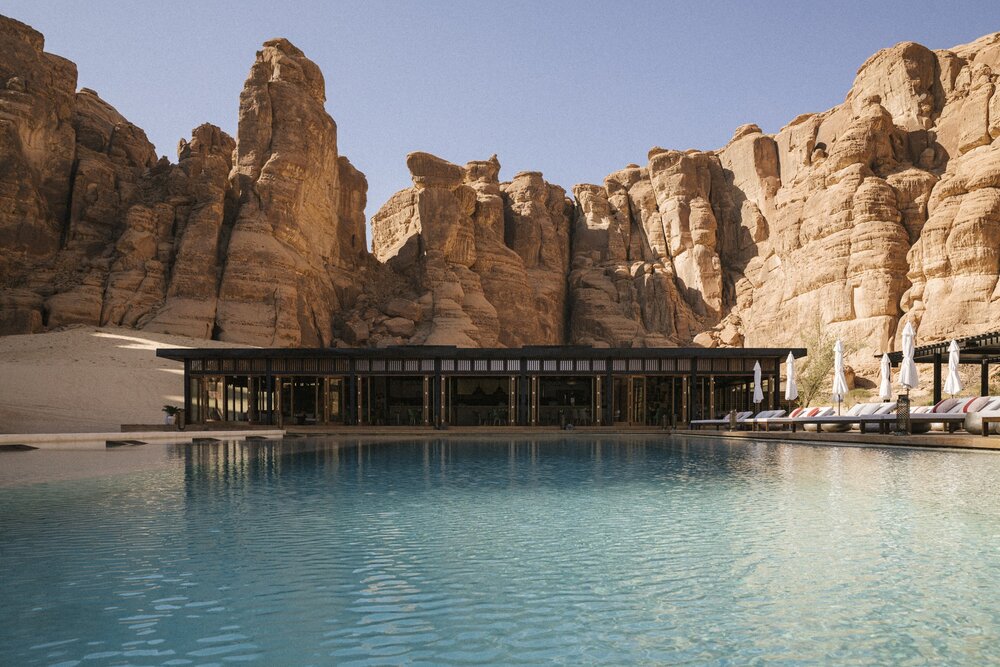 The Inscriptions of Dadan
Similarly, there are more questions than answers at Dadan, considered one of the most developed first-millennium BCE cities of the Arabian Peninsula, and Jabal Ikmah – an open library of 500 inscriptions left by travellers, described by one guide as “an early form of Twitter”.

Gaps in knowledge are as big as the gaping spaces between boulders and wind-sculpted monoliths in the scrubby landscape, but a sense of adventure and the unknown has Indiana Jones appeal. “I’ve worked in Syria and Jordan, but everything here is so fresh,” says Jerome Rohmer, part of a French archaeology team excavating sites. “We’re discovering things for the first time.”

RELATED:
Comment: Is Saudi Arabia the new frontier for luxury hospitality?
Comment: How sustainability can make a hotel relevant
2023: The rise of luxury travel

Big Brands Making their Saudi Debut
Aiming high, the Royal Commission of AlUla (RCU) has invited global talents to support its project, including chef Jason Atherton, who has opened a restaurant, Maraya Social, on top of the world’s largest mirrored building.

Encased in glass, the Maraya events and conference venue reflects the dramatic red-stone walls of the Ashar Valley. “I’ve been coming to the Middle East for 20 years and I didn’t know such natural beauty existed in this area,” says the A-list chef, when I meet him at the venue.

One of the culinary world’s biggest names, he admits this is the greatest challenge of his career. “It feels like I’m doing something a bit left-field, but I can see the potential. If we pull it off, how cool would that be?”

Other pioneering spirits are following suit. Banyan Tree and Habitas have already opened properties in the scenic Ashar Valley, while launches from Aman are in the pipeline – along with a logistic-defying project from French architect Jean Nouvel, who hopes to create a hotel by drilling down into the rocks. 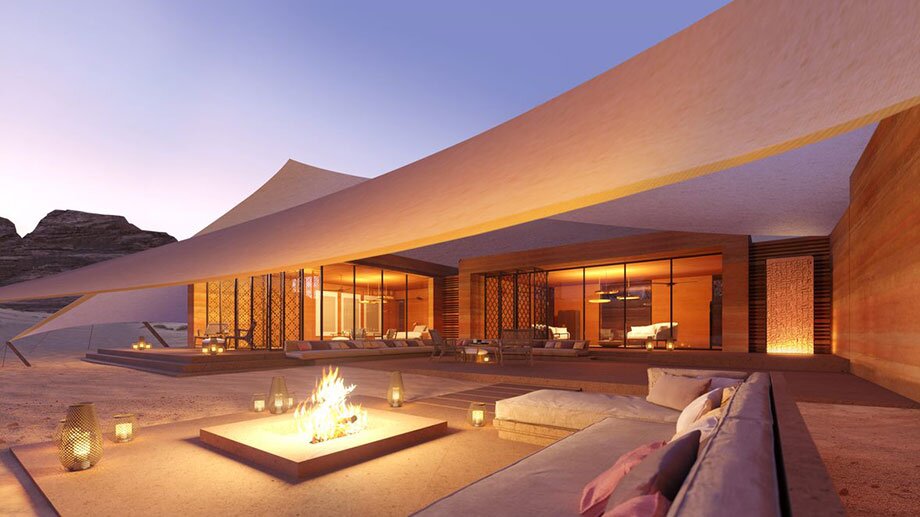 An Economic Shift: From Oil to Tourism
All this has not gone unnoticed by the World Travel & Tourism Council, which held its global summit in Riyadh last month. Although plans have been sensitively thought through, with the aim of creating an exclusive eco destination rather than another desert mega city, the pace of development in Saudi is rapid. But why now? The obvious answer is economic: the oil-dependent nation is acutely aware of the need for an alternative source of income. But the move indicates a deeper shift in the country’s social dynamic.

“It’s important to remember that 70% of the population is under the age of 30,” says Phillip Jones, chief destination marketing officer for RCU. “This young generation, who were educated globally, looked around and thought, ‘We can do this in our country’. There’s no going back to the old ways, because they’ve had a taste of what it’s all about.” Plus, he adds: “Why not be part of something that will transform this country and create opportunities for young Saudi men and women?”

“They say we don’t have freedoms, but nobody ever asks us, so how would they know?” says Makki. Her warmth and generosity are characteristics passed down through generations. Highlighted by Thesiger on his early expeditions, hospitality is nothing new.

“Having tourists come is a dream come true,” enthuses Makki, outlining a vision shared by friends and family. “I wish my uncle and my grandfather were alive to see what is happening right now.”

❂ A one-year, multiple-entry eVisa allows up to 90 days in the country. Find out more at visa.visitsaudi.com.

❂ Islamic law is strictly enforced, so it’s important to be aware of local customs. Public displays of affection are frowned upon, profane language or gestures should be avoided and taking pictures without people's permission is not permitted.

❂ Saudi is a dry country, and it is an offence to drink in public.

❂ Technical equipment such as binoculars are restricted, and may be confiscated.

❂ Although tourists should dress modestly, it’s not mandatory for female travellers to wear the abaya (a full-length robe) or to cover their hair in most places.

❂ The currency is the Saudi riyal, which is pegged to the US dollar.